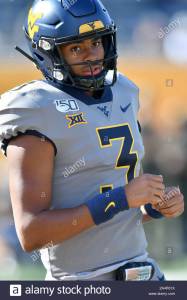 Since the end of the 2019 Football Season, WVU fans have witnessed a few coaching changes, but the more disturbing thing to me, has been all the WVU players who entered the Transfer Portal. Of all those who entered the portal, I hated to see Trey Lowe III go the most. I was looking forward to seeing battle against Doege for the Starting QB position. I would have preferred to see Austin Kendall enter the Transfer Portal. However, Trent Jackson may just be what WVU needs. Last season I saw lots of potential in Jackson. We all know Kendall is a dud, and I am not all that hyped on Jarret Doege. Doege may be a better back up.

I just finished watching the highlight videos of all this years WVU QBs, including Garrett Greene and Matthew Cavallaro. The biggest run threat in this group is Trent Jackson, for he has moves ans speed. The least athletic is Austin Kendall. If Doege wins the starting job, it will be due more to his experience than anything else. I have already read articles stating that by mid-season Doege will be in the Heisman hunt. You can believe this if you want, but I don’t see it.

It appears almost every year WVU media selects a WVU QB as a Heisman Candidate. Its been like this since Geno Smith was the QB, and WVU has yet to a player win the Heisman. WVU has had some quality QBs over the years, and put a few in the NFL. Only one QB from WVU has ever won a Super Bowl, and he doesn’t get the love or respect he deserves, and that’s Jeff Hostitler. The reason Is Jeff wasn’t as exciting to watch as Geno, Pat or Major. Jeff knew how to win. He wasn’t as fast as Pat, but he threw a much better deep ball. I always felt Major costed WVU the National Championship when WVU lost to Notre Dame. I felt that loss was the worst game of Major’s college career.

I hope Trent Jackson gets a true shot at the starting QB position. Of all the QBs on this years roster Jackson is the more talented runner. The better arm, well we all know it isn’t Kendall.

I don’t know why so many WVU 2020 starters entered the Transfer Portal. The offensive linemen who left, I wish them the best, but as we all should know this group has needed a complete over-hall for some time. WVU also needed more height and size at CB, and Safety. The DL and LBs are a talented group. WVU needed DEs, big TEs with big hands, and it needed receivers that can catch the ball, and big RBs that aren’t afraid to block and who can run.

As spring and supper move along we’ll hear about this team. My advice don’t believe all you read. Go watch video and game clips. Last season, I was the only writing that Kendall shouldn’t be WVU’s QB. Some WVU writers had him as a Heisman candidate. I’m sure Kendall will gets lots of hype this spring. I want to see Jackson get a full Quarter of play in the Blue Gold game the same as we’ll see Doege and Kindall get. Jackson deserves a shot, just as Lowe deserved last season, but never got.