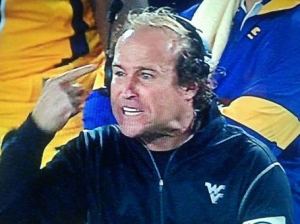 As fans we support our team through the good and bad times. We get mad at coaches and players. What sets WVU fans apart is that we want out sports to be mentioned amoung the elite, and we want to win a National Championship, and we truly get upset when we feel we have a team to do this and it fails. We get madder and more upset than other fans, and we are very vocal about it.

This doesn’t mean we are bad fans, what it tell other folks is that we are very passionate fans and that we expect more from the coaches and players.

There was a time when you looked at the list of football players who signed their Committment Letter it was primarly filled with 2 Star recruits and a few 3 star recruits. Today, under Holgorsen you  don’t see any 2 Star recruits for what you see is primarily a list of 3-Star recruits with a sprinkling of 4-Star recruits. Under Holgorsen we seen more kids from WVU being recruited and coming to WVU as walk-ons and many of the young men going on to earn a full scholarship, and some whether they came on with scholarships or were walk-ons going on to the NFL. The number of WVU football players going on to the NFL has increased. WVU hasn’t produced any players that have went on to be standouts in the NFL, none the less these players did get a chance to make their NFL dreams come true. The other thing Holgorsen has done is he is sending more WVU players to the NFL.

Geno Smith flopped big time in the NFL, but he has been there the 5 years required to get an NFL pension, and others have done the same. I’m sure many fans thought that one of the White brothers would be a standout in the NFL, and it could still happen. Shelton Gibson is still struggling with the Eagles, but he struggled at WVU as well for he couldn’t catch a pass coming at him, and he is struggling with the Eagles. Tavon Austin has been given a 2nd chance with the Dallas Cowboys. Pat White couldn’t make it in the NFL. Yet, many of these players were heros to WVU fans for they were exciting to watch. WVU fans love watching players that are exciting to watch. More recently WVU fans loved watching Will Grier pass to David Sills V.

WVU has this in its DNA, for its has a history of obtaining these types of players no matter who the coach was.

The reason WVU fans are so vocal is that we want that elite status, and to get it WVU must win a National Title. WVU hasn’t been in a National Title game since 1988 when it lost to Notre Dame. WVU fans yearn to see the Mountaineers beat Oklahoma, and for them to win the Big 12 Title.

WVU fans are passionate fans, and get very vocal when they the coaches and players aren’t playing upto their expectations. I know, for I am one of those fans. If you follow me, then you know I’ll defend Holgorse, but I’ll also slam Holgorsen when I feel he needs slammed.

There are some things that Holgorsen has done as head coach that I disagree with, and others that I have felt he needed defended, and I have defended him.

Under Holgorsen recruiting has improved, and more players from WV are being recruited. This is a positive. Not going with Trey Lowe in the 2nd half was definitely a negative, and I voiced my opinion.

With 7 scholarships left, I hope to see at least 1 more signee being a player from WVU, and a few WV players accepting Walk-on scholarships.

What we haven’t seen under Holgorsen is an OL that is good at both pass and run blocking, but it has improved since the hiring of Joe Wickline. Another short fall has been the talent at defensive back. WVU needs 6 quality DB just at corner, and WVU gets is 2 or 3 good Corners and Safeties. The lack of depth at these positions has hurt WVU since Holgorsen has been there. However, WvU signed 2 four star recruits for 2019, but is this enough. WVU has 2 good DBs with Derrek Pitts and Keith Washington. WVU also needs a couple TEs who can play like Tevon Wesco, and a big powerful running back. Wesco never got the ball as much as he deserved in 2018. WVU has 7 TEs on the Roster, so hopefully a couple of them will step up to the plate.

I think with the new Signees, and if Holgorsen can fill the remaining Scholarships with at least 3 or 4  4-Star recruits WVU should at least win 8 or 9 games in 2019, but this will depend greatly on who the starting QB is. One thing for sure it can’t be Jack Allison. WVU needs a QB that can excite the fans, not one who is more like a robotic trowing machine. Lowe and/or Jackson can give WVU this excitement and energize them. Maybe one of these two can be the next Kyler Murray.

Lastly, Holgorsen needs an Offensive Coordinator. Let Holgorsen Coach and some else run the offense and coach the QBs. Hire an OC and bring Clint Tricket back as the QB coach.

WVU fans get upset, voice your opinion and do what you, for it is who you are and what WV is about. Let your passion be heard.