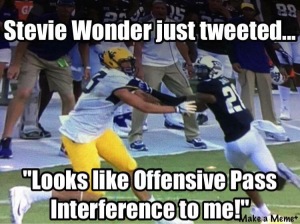 Who is interferring with Who

Ever since WVU joined the Big 12 in many games every season it apprears that WVU has a second opponent on the field – the officiating crew.

I’ve often wondered if the officiating or lack thereof is due to WVU not being located in the midwest, and the officials are trying to punish WVU for not being a midwest team. All you have to do is listen and watch a WVU game against a Big 12 opponent and you’ll not only see terrible calls, but you’ll see ghost calls, and even the sports commentators will criticise the call. And then there is the no-calls or non-calls against Big 12 opponent.

If you look at the photo above you see WVU WR David Sills being held. Yet, it was Sills who got the pass interference call. In the TCU game a WVU defender received a late hit out-of-bounds call, but the tackle started inbounds, and there was WVU CB McDaniel’s interception that was ruled out-of-bounds that was clearly inbounds.

We saw Texas Tech players grabbing and hold two WVU players and it wasn’t called. We saw holds on top of holds by Baylor that officials didn’t call. Even the delay-of-game call against WVU’s defense in the 4th quarter was a bogus call, for defenses have a right to call their defense.

Over the years I’ve seen WVU QBs take a beating with late hits and roughing the passer calls that the officials saw and refused to make the call. When it comes to the Big 12 officiating crews, WVU is the bastard step child. I look back at the big hits that WVU QBs Geno Smith, Clint Tricket and Skyler Howard received with an official standing there looking down at them to see if they could get up and never making a roughing the passer call.

Now to be honest there is one or more holding plays on every play that isn’t called. Players and coaches know this, but its the flagurant holding calls that are not made that make officials look bad. When you see an official looking at a player grabbing and pulling a jersey, and not calling the hold then this is bad. If officials are going to call roughing the passer on WVU then make the same call against WVU’s Big 12 opponent when they do it. Just don’t stand there to watch and see if WVU’s QB can get up and isn’t groggy before throwing the flag. We saw this a lot in Big 12 games when Trickett was WVU’s QB.

Believe it or not WVU is a member of the Big 12 Conference and deserves the same respect as the other Big 12 teams and should be treated equally when on the field. The Big 12 needs to fine and even suspend officials who flagrantly don’t make calls they see, and calls like the pass interference call against David Sills should be overturned.

They should get rid of its bad officials, fine and place game suspension on the others, especially if a player gets hurt or their officiating determines the outcome of the game. This type of officiating won’t go away until the Big 12 does something to correct it.