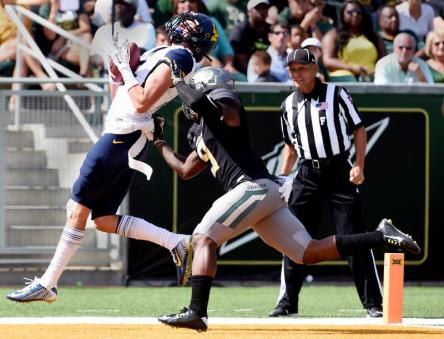 When anyone approached me this week and asked how WVU was going to do this weekend, I’d respond, “get killed by Baylor”, and that is exactly what happened in WVU’s 38 – 62 loss. I don’t think WVU would have won even if they didn’t have all the penalties, but all the penalties didn’t help their effort any.

I’ve been rather had on WVU starting QB Skyler Howard, as of late. Today against Baylor, I believe we saw the best of Skyler Howard. He gave all he had today. He had one turn-over when he threw an interception in the end-zone, instead of running the ball for a 1st down. If anything was evident today about Howard, it is his lack of accuracy. Yes, he hit some long balls, but he also missed many shorter throws. Howard’s reaction time is late. He has to see what is taking place on the field instead of anticipating what is going to happen on the field. This causes his passes to be late and off target.

I congratulate Howard on his game today, for he played well and as good as I ever expect him to play. However, I still don’t believe he is the QB WVU needs to lead this team, and with WVU now with 3-wins and 3-losses, I look for Holgorsen to keep Howard as the starter.

I have 2-questions for WVU’s coaching staff; if you know that Yodny Cajuste is going to be picked on and Big XII teams are going to blitz your left-side, then why not keep a back in the backfield to pick-up the blitzer coming off the edge? I’ve seen this in all 3 of the Big XII games. Also, why not have spy on the defense to track and keep Big XII QBs from running the ball as freely as Baylor QB Seth Russell did today? WVU could do nothing to slow down Russell, who had his way with WVU’s defense.

It was evident that WVU’s defense missed safety Karl Joseph, for there were way too many missed tackles. What made Joseph so talented was that he not only hit opponents hard, but he wrapped them up, and WVU’s defense today didn’t to a lot of wrapping up against Baylor. The defense while it has depth and talent, needs to improve at LB.

WVU’s offensive line didn’t play all that badly. It is evident though that WVU needs to recruit some 4 and 5 star offensive linemen. The OL lacks the needed depth to play against the Big XII’s best. However, I think this is one of the best OL’s I’ve seen under OL Coach Ron Crook, but there is a lot of room for improvement.

While WVU RB Wendell Smallwood continued to show why he is WVU’s best offensive talent, a new talent on the offense appears to be on the rise. 4-Star QB recruit David Sills, proved himself as a very talented WR. I was totally shocked to see Holgorsen burn his redshirt, but it looks as though this would be redshirt  deserves to be on the field.

Shelton Gibson, Jovon Durante, Daikiel Shorts, Jordon Thompson and Ka’Raun White all proved today that WVU has a very talented core of receivers. All these guys need is a QB that can get them the ball with some consistency.

I was also moderately impress with the play of Rushel Shell III and Donte Thomas-Williams. I don’t believe I’ve seen either of them work harder for additional yards. And what impressed me the most was they didn’t fumble the ball, and they lowered their shoulders to take on defenders, thus ‘blocking for themselves’ for extra yards. I hope we continue to see this type of play from the two of them.

Kicker Josh Lambert has been struggling as of late and isn’t exhibiting the perfection WVU fans grew used to last season. He hasn’t been Mr. Automatic with his field-goals. I felt that punter Nick O’Toole had one of his better games punting this season.

If Howard can’t hit the deep ball, then pitch it to back-up QB William Crest and let him toss the rock. Crest threw the deep ball with great ease today. QB/WR David Sills caught his TD pass from QB/WR William Crest. Both of these players were 4-Star QB recruits.

I still think that it would be prudent for WVU to give TE/FB Eli Wellman the ball, especially on 3rd or 4th and short situations. If near the goal-line then give it to the taller Cody Clay and have him dive over the line. It was good to see Cody Clay catch a TD pass today.

Where does this team go from here? It is evident that Holgorsen is looking for answers, as he burned the redshirt of true freshman QB David Sills and play him as WR. We saw Ka’Raun White with his first catch and he was tough for Baylor to tackle. I like the strength with which he runs.

It was sad to WVU CB Terrell Chestnut go down with a shoulder injury. I hope this isn’t a season ending injury, but going by the way he reacted, I doubt if we’ll see him against TCU.

Today, against Baylor, I truly believe we’ve seen the best WVU will be this season. I felt these guys gave all they had. There is a lot talent on this team, but where this team needs to improve most is on the OL and at QB. As far as the running game, if Shell and DTW continue to develop as they did today, they both give WVU fans promise. It would be good to see Jacky Marcellus get more touches, for I liked what I saw from him earlier in the season.

The hardest guy on WVU’s offense that WVU has to replace next season, is the play of Wendell Smallwood. I don’t see a Smallwood like player on the team this season.

Holgorsen needs to continue to recruit QBs, RBs and offensive linemen. However, I believe WVU’s QB of the future is still on the sideline wearing a yellow cover and carrying a clipboard.

2 thoughts on “Breaking Down WVU’s Loss To Baylor”