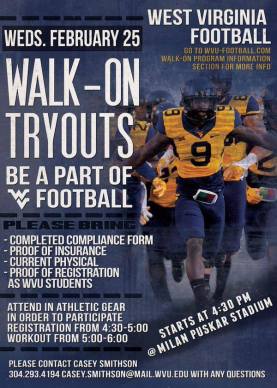 I haven’t heard of  WVU Head Coach Dana Holgorsen hosting a walk-on tryout for WVU students since he first arrived in 2011 and was in search of Quarterbacks to help with practice.

The tryouts to be held on Wednesday, Feb 25 of this year appears to be position specific in the ad posted on WVUSports.

With WVU only having 7 running backs on the roster, of which 4 have been starters, and one looking to start, this leaves only two running backs to work with the scout team. Can we rightfully assume that the one position the coaches want to add to is RB?

As it stands right now there are only two running backs for the scout team: r-Fr Prentice Tillman and this year’s Preferred Walk-on Brady Watson, who won’t arrive at until May.

There also appears to be a shortage at center, so we most likely could remove the position of center as from the specialist list. As far as I know there are only 3 centers on the roster and all 3 have game experience: Tyler Orlosky, Tony Matteo, and Stone Underwood.

Here are the totals for the other positions who are currently on campus, minus specialists:

If all the 2015 recruits show up, the numbers should look like this:

As you can see by the number, WVU is light at running back. However, one or both ATH could be moved to running back.