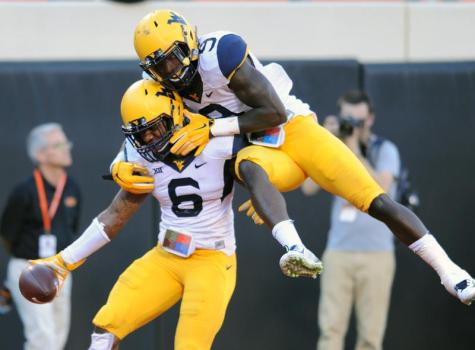 Dravon Henry’s Pick 6 – Thanks to WVUSports

WVU’s player conditioning showed big time as they survived the heat in Stillwater to beat Oklahoma State by a final score of 34 to 10. WVU QB Clint Trickett stated in his post-game interview that the officials told them the temperature on the field was 110 degrees.

He also said they were so hot and tired, the players were not talking on the sidelines or doing much celebrating in the locker room when the game was over.

It was pretty funny to hear the announcers criticize WVU Head Coach Holgorsen for running the ball on 3rd and long instead of passing it. Especially when they had to comment on the success of the run after the play.

I believe Holgorsen’s play calling would have been different today if it had been cooler. The heat getting to Oklahoma’s defense in the 4th quarter helped a fresh WVU running back Dreamius Smith to have a 40-yard touchdown run. OSU’s defense looked more tired than WVU’s.

After this game, I’m sure the Mountaineers will be more than happy to get back to the cool hills of West Virginia for next Saturday’s game against TCU.

The depth that WVU gained last season has proven itself very well with WVU now sitting at 4 – 1 in the Big 12 and 6 – 2 overall.

My favorite post-game comment came from WVU WR Kevin White, when he stated, “I don’t care about the Heisman. All I want to do is win games. So if a team wants to double cover me that’s fine for that means they aren’t covering someone else.”

I would say White cares about the Heisman, but only one player will win it, and he was ranked 20th on the list of 25 Heisman hopefuls. I can understand where he was coming from.

What we have seen the past three games with WVU is a defense that has been turned loose and allowed to gamble. The pressure this defense has begun to put on opposing quarterbacks is outstanding.

It appears that each week we see more and more tackles for losses and sacks. Its becoming obvious that one of Holgorsen’s best decisions this year was to appoint Tony Gibson the Defensive Coordinator. Without a doubt, his 2nd best move was to hire Tom Bradley.

The biggest weakness for WVU is the punt return game, but it is obvious that the coaches are working hard to correct this.

Every week we see where someone has graded each unit of WVU’s players. No matter how you grade any of these groups after each game, one thing that is obvious is improvement every week. The defense especially has improved every game.

I truly believe WVU’s defense completed their turn around when Tony Gibson cut them loose in the 2nd half of the Texas Tech game. This allowed these players to do their thing and they were successful.

It was this success that allowed them to get better each week. The confidence the coaches have in these players helps them to believe in themselves and each other.

The defense is tackling well in space, putting intense pressure on quarterbacks, and getting many more tackles for losses. WVU won the turnover battle against OSU thanks to Dravon Henry and his two interceptions, one of them a pick six. That was the icing on the cake.

I expect a few more of these before this season ends. You can bet that those two interception will go a long way in building confidence with WVU’s defensive backs. We also saw WVU safety Karl Joseph working hard to get a strip today.

Before this season ends, WVU’s defense will get some strips, cause and recover some fumbles. These players are just getting started.

I realize that TCU beat Texas Tech 82 – 27 today, but do not expect TCU to rack up points like that in Morgantown next week. TCU is a very good team, but I cannot imagine anyone putting up 50 points or more against WVU now.

WVU’s defense is hungry and obviously playing with confidence. This game will be a battle and I don’t expect either team to score 40 points.

If Holgorsen and Gibson can continue play calling as they have the past three games, WVU has a shot at winning this one. If TCU is predicted to win by more than seven points, take the points and bet on WVU.

WVU’s offense will have to come out fast in the 1st half and continue with the pressure in the 2nd half to tire the Horned Frogs defense. This game will likely be won in the 4th quarter.

As I stated last week “All WVU Has To Do Is WIN Out”!

CONGRATULATIONs to Holgorsen, his coaches and the players for their win over the Cowpokes!!!