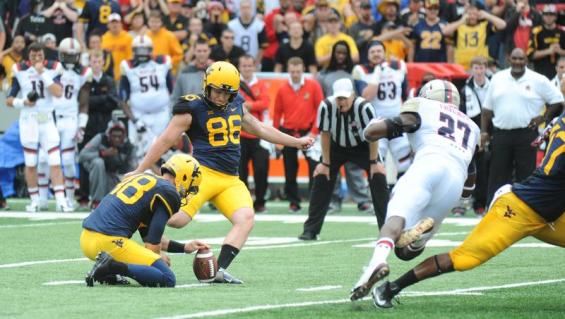 For the first 1 1/2 quarters of this game, I was scaring my big bad 78 lb pit, for I was screaming and yelling. I have read the articles and listened to ESPN and Fox, and WVU barely got an honorable mention.

Even WVU QB Clint Trickett was not mentioned by ESPN for his performance, though he ended up with nearly an 88 quarterback rating (QBR). Overall, I felt WVU played well on all three sides of the ball.

In both the Maryland and Alabama games Rushel Shell fumbled near the goal line, but the Alabama fumble ended up being a non-fumble. Others with two fumbles are Mario Alford and Jordan ‘Squirt’ Thompson. WVU cannot afford 4 turnovers next week against Oklahoma.

The primary improvement I saw in the Maryland game was on defensive patience. Against Alabama the defense was fast, but at times too fast.

Today, the defense ran under control and this why they all the tackles against Maryland for lost yardage. The one thing the defense needs to work on is catching the ball, as they missed several opportunities for interceptions.

The offensive line (OL) did a good job of protecting Trickett. When they got the 2-yard push for Rushel Shell’s 1-yard touchdown run, I felt good, and had hope. However, that is as far as it goes.

The OL has got to start getting a bigger push for plays running between the tackles. Once they can get a 5-yard push and block at the next level of the defense, they will have arrived.

What I saw in the second half was that Maryland realized WVU’s OL could not get the big push up the middle, so they hunkered down and started shutting down runs on the edge.

The defensive backs laid back to take away the deep throw. This left WVU with the option of the short passes. The short passes worked for WVU, and is what kept Maryland from dictating and taking over the game.

My primary concern against Oklahoma next week is the Sooners are not going to be concerned with WVU’s run up the middle. And why should they, as WVU is only getting 1 to 3 yards running up the middle.

I expect Oklahoma to play more to shut down WVU running off the edge. When this happens, it will be all up to Trickett and the passing game.

Most of WVU’s run plays of the edge are pass plays. Trickett will be forced to throw short passes as well as shots down the field. This may be the game Trickett throws for 600 plus yards if WVU is going to keep pace with Oklahoma.

The other thing that concerns me playing Oklahoma is turnovers, especially after having 4 against Maryland. That will get you a loss against the Sooners.

Josh Lambert has also got to become more efficient kicking field goals if WVU is going to continue to win going forward.

With all this said, there are several players who need kudos for this game beginning with Clint Trickett. All 5 running backs played well, and do did Kevin White, Mario Alford, and Daikiel Shorts. I was glad to see all 5 running backs get into the game.

There are so many players on defense that deserve Kudos for their play that I don’t know where to start: Kwiatkoski, Chestnut, Henry, Worley, Dillon, Joseph, Nwachukwu, Bruce, Rose, and the list goes on.

Lambert does deserve recognition for kicking the winning field goal.

The OL should be commended for the protection they gave Trickett and for playing over 100-plays. I know these guys had to be worn out, and in need of ice tub. Without that protection Trickett could not have thrown for over 500 yards.

This was a good win for WVU, and the resilience of this team definitely showed through. They refused to quit. Their heart and no quit attitude showed through.

Overall this is much better team than last year, for this team ‘finished’ which is something they failed miserably at last season.

As a fan, I’m proud of this team. I just wish the media would pick-up on the play of Trickett, White, Alford, Shell, and Smallwood. All they get is a passing blurb. However, if WVU beats Oklahoma, the attention will come.

What I like about Trickett is that he is a pro-style QB. He is a pocket passer, but can run when he needs to. If he continues playing like this then we will eventually see him playing on Sundays. Right now, Trickett reminds me of Green Bay QB Aaron Rogers with his play.