The media is billing the WVU vs Alabama Game in the Chick-Fil-A Bowl as Clint Trickett vs Jacob Coker, due both being Florida State transfers. Since many believe that Coker is the ‘savior’ for Bama’s 2014 football team, let us do a little comparison of our own: 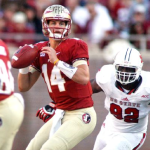 Other important notes going into this game:

The media has been publishing all these things, and yet, it truly believes that Alabama is going to roll-over WVU. The media has also failed to recognize that WVU goes into the game with a ‘mental advantage’ as a huge underdog.

These two teams match-up better than what the media wants everyone to believe. WVU loves being the underdog, and you can bet Holgorsen, his staff and the players are eating this up. If there is an underdog here, I see it being Alabama because:

Thus, I once again disagree with the media and discount their claim that Alabama will roll-over WVU. Alabama may be the team having a tough time trying to hang on in this one.

One thought on “WVU vs Alabama – Trickett vs Coker”